Billy Collins' poem in the Amtrak magazine, The National

Hey.  Maybe my 4 days and two nights on Amtrak trains to get back up to the Northeast Kingdom lets me copy here Collins' poem that's on page 42 of issue number 04.  Here it is.  He's how we got started, after all. 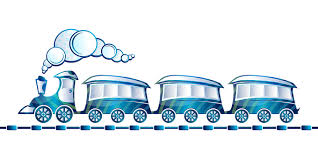 The Convergence of my Parents

This morning I am looking out my window
at a crowd of white irises,
imagining my Canadian mother in 1934
looking out her window on a train,
the one she rode from Toronto to Los Angeles
to work as a nurse at Queen of Angels Hospital,
only her train has stopped short of a little town
somewhere in the Midwest,
and she is looking out at the irises in someone's garden.

And while that might have been occurring,
my Massachusetts-born father was riding
another train from Boston to Galveston
to work as an electrician on an off-shore oil rig,
a man who was more likely to be reading a newspaper
than admiring the blossoms in a stranger's garden,
but who must have spent some time
looking out at the scenery, wondering about himself,
and maybe a field of wildflowers went flashing by.

Only years later did two other trains
carry the two of them east,
the tracks of their lives meeting in New York,
where I was born -- because I wanted to be close
to my mother, my father liked to joke.
She was still a nurse, and he was her patient.
He had been struck on the head by a wrench
a co-worker had fumbled, and that is the story
of how I got here, how I pulled into the station of my life.

He likes for poems to be humorous.  Is this one that?  I can't tell.  Maybe I was too long on the train.  In any case, I like this one.  And I look forward to when the Wednesday Poets converge again. -- Sylvia